Mock muggings should be staged across the UK to test the public’s willingness to aid victims and report crimes, a charity has said. The group Witness Confident says it wants to challenge a “walk-on-by” culture to street crime. It says the disengagement of the criminal justice systems makes it harder for communities to fight crime. 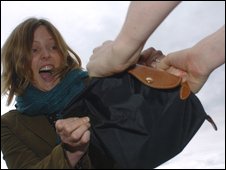 Mock muggings: What would you do?

The group also wants to run an online social network so people can map crimes to help witnesses come forward.

Last year, a major government review warned that public confidence in the criminal justice system had fallen, partly because they felt “cut off” from its workings.

Witness Confident, says it wants to challenge some of these problems.

No doubt the research will show the vast majority of individuals are reluctant to get involved in any sort of violent incident.

So why are individuals reluctant to get involved ?

Having been involved in numerous violent incidents myself I can identify some of the issues which may make people reluctant to get involved.

The most obvious is the fear of getting injured or even killed.

How many times do we read about people intervening in a dispute and then becoming the victim themselves ?.

How many times do we hear about individuals going to the aid of a victim and getting charged with assault ?

What if you do come across a violent incident and end up in court ?, How safe are you now?

You could still face intimidation by friends/family of the accused during the court proceedings.

What about when you finally get to give your evidence and come up against a clever defence barrister who attempts to make you look like the guilty party ?.

These are just a few of the issues that people may reflect upon when coming across a violent or potentially violent situation.

This entry was posted on Tuesday, September 29th, 2009 at 10:49 am and is filed under personal safety. You can follow any responses to this entry through the RSS 2.0 feed. You can leave a response, or trackback from your own site.

We're not around right now. But you can send us an email and we'll get back to you, asap.

Instinctive reactions to muggingsArticles, News
Instinct/Intuition Part 2Articles, News
We use cookies to ensure that we give you the best experience on our website. If you continue to use this site we will assume that you are happy with it.OkMore Info